How Ranked Works In Valorant 2021

Valorant is a 5v5 multiplayer FPS(First Person Shooting) Game with a rank mode. Many ex CS:GO players are switching to Valorant competitively. Like many FPS games out there, Valorant has a casual and competitive mode.

Valorant’s tiered ranking system rewards teamplay. Valorant’s rank mode is for players who are serious about improving their skill as a player. But in order for you to play ranked games, you have to unlock the competitive mode first.  In this guide, you will learn how ranked works in Valorant.

How To Unlock Ranked Mode In Valorant?

To unlock the competitive mode in Valorant and get your rank, you have to play 20 unranked games. It does not matter if you win or lose the 20 games. But keep in mind it does affect your rank once you unlock Valorant’s ranked mode.

Playing 20 unranked games allows you to learn and understand how the game works. Playing with other players will be more easier. This will help your transition to competitive mode .. It will also allow you to become familiar with the map layouts, weapons, and character abilities.

Once you have completed your 5 placement matches. You will have an assigned rank for your competitive games, you will also be rewarded with a rank badge. If your rank resets after a season, you will play three placement matches instead of five.

Placement matches can also be played along with friends. Even if your friends already have a rank, you can still play with them in your placement matches. If the rank discrepancy is large between you and your friends. Then they won’t be able to queue a competitive game when you are teamed up together.

What Are The Valorant Ranks?

There are eight ranks to Valorant’s ranking system. Each rank has three tiers except for the Radiant rank and Immortal rank. Immortal rank used to have three tiers but on a recent update they changed it to 1 tier. The rank starts from Iron, Bronze, Silver, Gold, Platinum, Diamond, Immortal and Radiant. The highest rank used to be called Valorant but Riot Games changed it after the community backlash. Only the top 500 players from their respective region will achieve the Radiant rank. And approximately the top 1% in the region will achieve the immortal rank.

Regional leaderboards were introduced during the Episode 2 update. You can view the leaderboards in game or on the Valorant website. The leaderboard page will show your rank and rank rating. You can also be anonymous and be seen as a secret agent if you like. 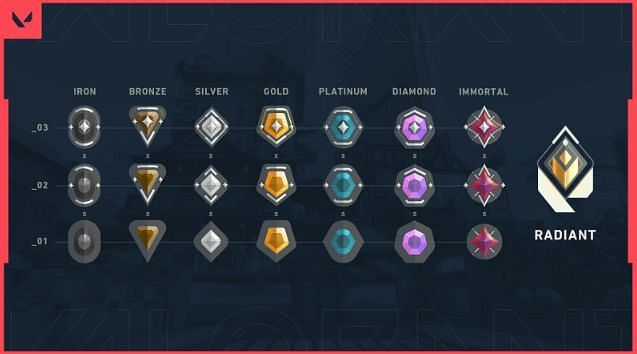 In order to have a ranking on the leaderboard. You have to play at least 50 ranked games and play one competitive game a week to keep your place in the leaderboard. If you do not play ranked for fourteen days, your rank will be hidden.

You can also skip tiers and even divisions if you build a lot of matchmaking ratings. If you consistently win games and be the game MVP, your chances of skipping ranks will become much more likely. Playing a lot of games can also give you more information on how ranked works in Valorant.

How Do I Rank Up?

Valorant’s competitive ranking system is based on your wins and losses. Your contribution to the objectives, your K/D/A ratio, and your abilities used will also have a role. The most important factor for your rank is game wins. But individual achievements also play a role. The more you contribute towards your team’s win, the higher chance of ranking faster.

There are three types of rank effects with different symbols. 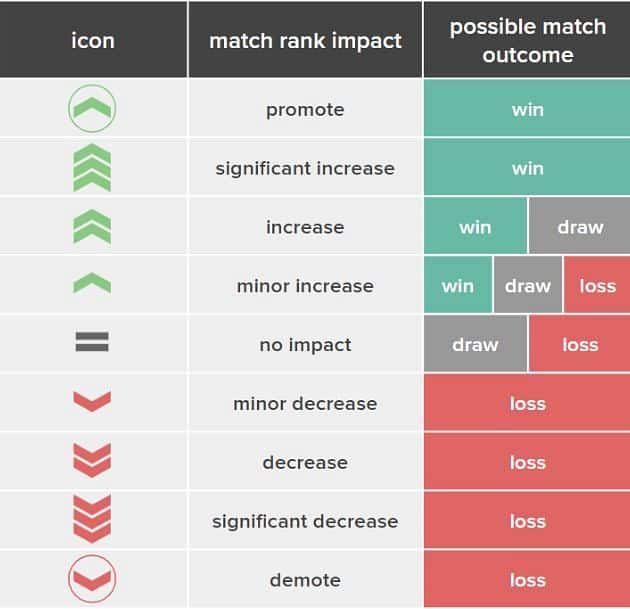 Currently, it is difficult to predict when you will be promoted to the next rank or demoted to the previous rank. As soon as you get a rank you should prioritize team cooperation. The ranking system was built to combat rank boosting, smurfing. And to make sure that the competitive mode is balanced for all the players.

There is no exact formula to show how ranked works in Valorant. But there are guidelines released by Riot Games. We can follow those guidelines to rank up faster in Valorant.

What Are Valorant Acts?

Valorant acts are the same as seasons. A Valorant act will last approximately two months. During the duration of the act, you will be able to work on your rank and track your overall rank progression. This includes statistics, like your win rate. Episode 2 – Act 1 started on January 12, 2021.

What Are Valorant Act Ranks?

Valorant act ranks is a triangular badge you can achieve. It displays your highest ranked wins at the top. While the smaller triangles at the bottom are color coded. They are based on the rank at which you have won your ranked matches. The more higher ranked wins you get, the more your triangle fills up with higher rank colored triangles. 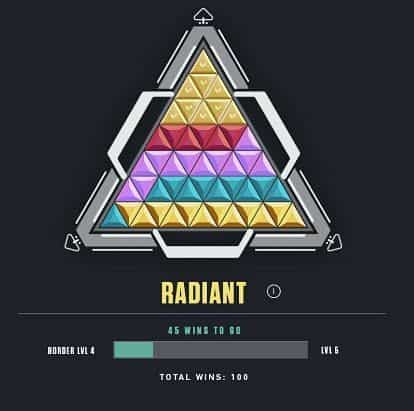 The Valorant act rank badges will be displayed on your career page. Your act rank badge will also display your final leaderboard position at the end of an act.

How Do I Track My Rank Progression?

Your rank progression can be seen in your match history. The leaderboard and progress bars are also ways to track your rank. Episode 1 shows arrow’s, but Episode 2 now shows a progress bar that shows how near you are to the next rank.

You can find each episode’s rank rewards on the rank info page.

Will My Rank Decay?

According to Riot Games your rank will not decay or decline if you are inactive. If you will be inactive for 14 days your rank will be hidden. Until you complete a new competitive match after the 14 days.

You can take a long break from the game without you having to think about getting demoted. So you don’t have to worry if you have a long holiday. Because you won’t get demoted from diamond to platinum after being inactive for a couple of days.

Can I Play Competitive Games With Friends?

Valorant allows a party of 5 people. But if your party is behind or above you by 2 ranks they won’t be able to play competitively with you. This is to make sure that the game will be balanced and fair.

If you are in a party, the matchmaking system will also match you with players that are in a party as well. Valorant is a team game and playing as a team is a major component in the mastery of the game.

Valorant is also easier to play with teammates. Because you can communicate with each other. And also create tactics that will be helpful than playing with strangers.

Valorant is a team game and should be treated as such. Play with your friends to be able to have the most out of it.

If you play with friends, you will have more fun. And also rank up faster if you play your matches with coordinated roles with your party.

It is also important to note that you will have to be active and helpful to your teammates during your matches. These are the guidelines in order for you to understand how ranked works in Valorant.